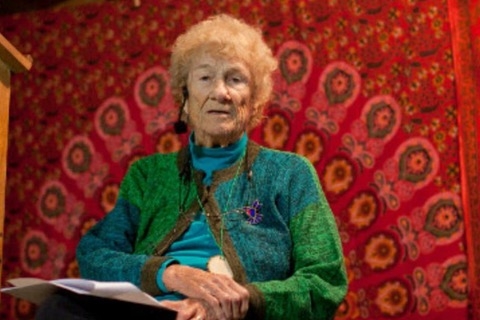 Cardy Raper used to have writing down to a science. Literally. But then she retired.

“I had written maybe 50 scientific papers and chapters,” the Burlington-based writer and scientist said during a recent late-winter conversation. “I officially retired in 1994, but I worked as a research track professor until 2004. I finally decided to stop doing lab work and start writing.”

Beginning a new chapter in her career and life was no small feat for Raper, though.

She’d blazed a successful trail over more than six decades, beginning with receipt of a Masters Degree in Science from The University in Chicago in 1946. She followed that up 31 years later with a Ph.D. from Harvard University. While there, she worked as a Biology Research Associate and Lecturer until 1978. That same year, she began a five-year stint at Wellesley College as an Assistant Professor of Biology.

Finally, Raper, now 94, landed at The University of Vermont, where she remained until retiring in 1994. Another decade at UVM was in Raper’s future, though, which she spent studying fungal reproduction. Her work has been published both nationally and internationally.

When Raper decided to settle into a relaxing retirement life of writing creative non-fiction, she discovered she had to learn a new approach to the written word.

“It’s a very different kind of writing,” she said. “It took about ten years to learn to write differently, to get used to the change.”

Raper pointed to the first League of Vermont Writers gathering she attended as an important turning point as an aspiring author. She recalled how Linda Bland, an editor who owned Cahoots Writing Services in Cambridge, VT, at the time, was a presenter that day, and Raper decided to seek her help.

“I approached her for help, and she helped me to see how my tendency was to go off on tangents … she was very good about making me focused, how to construct (my writing).”

Today, Raper continues to seek and give feedback and constructive criticism as a member of the Burlington Writers Workshop’s creative non-fiction group, which she credits as a significant influence on her work.

“It’s a very valuable learning experience,” she said. “We all come from different backgrounds, and we just kind of vet each other.”

The transformation Raper has gone through as a writer has yielded two published books, with another currently being written.

In 2011, she released her first book, Love, Sex & Mushrooms: Adventures of a Woman in Science, independently. Within, she tells the story of the relationship between her and her husband, Professor John “Red” Raper, their joint study of fungal reproduction, and Raper’s continuing scientific journey after her husband’s death.

“The book did well when it was first released,” Raper said. “It won an award for independent publishing, and it was picked up by Hatherleigh Press. This commercial publisher was good for distribution … but they changed the title, which I wasn’t crazy about.”

When Green Writers Press offered to re-release the book last year with her original title, rather than the cumbersome A Woman of Science: An Extraordinary Journey of Love, Discovery, and the Sex Life of Mushrooms , she jumped at the opportunity. The re-retitled book was published at the end of 2018.

Love, Sex & Mushrooms is Raper’s second book with Green Writers Press. The first, An American Harvest: How One Family Moved From Dirt-Poor Farming to a Better Life in the Early 1900s is a carefully crafted oral history between her late husband and his seven siblings in 1965. Raper recorded the discussion, which took place at a family reunion, and over a half century later, she was working through the hours and hours of recordings and transcriptions to form the powerful narrative thread that runs throughout the book. The book was released in 2017.

Today, Raper continues to write while still acting as a family historian and archeologist.

“I’m discovering my mom, Nell, and how she emerged from Victorian ways,” Raper said. “Nell’s father wrote a book about women’s roles in the Victorian age. I was appalled when I discovered his book.”

Raper’s deep dive into her mother’s life is her latest effort, a biography of the woman who raised her. Fortunately for Raper, her mother took care to preserve the past.

“My mother kept everything,” she said. “It’s all kept in an old, worn out freezer on the family homestead. Most of it, you’d never put in a book, but then there’s these wonderful gems.”

And for the foreseeable future, Raper will spend her time seeking out the gems, polishing them up, and putting them into narrative form.

“I’m having a ball,” she said. “It’s hard work, but I love it. I keep going over the sentences and paragraphs until I get it straight. There are so many different approaches to writing, and it’s wonderful.”

Ethan Dezotelle is an author and full-time behavior interventionist. His primary writing focus is novel-length YA paranormal fiction, but he also enjoys writing personal essays, short stories, and feature-style interviews. Ethan launched a blog, ethandezotelle.com, in late 2019. All the cool people are following it, so you should, too. He hopes to publish his first novel within the next year or two. He has three kids, a wife, and a step-daughter. They all put up with a lot, and Ethan is very grateful for their tolerance.